I’m observing Black-headed Gulls in their colony, situated on a small island.

A small chick of only a few days old has somehow ended up on it’s back on some rocks near the waterline.

It must have wandered off from one of the nests nearby.

It looks around helplessly, unable to get up.

“Ah, what a cute little chick.”, I find myself thinking.

“It’s a good thing that there are 2 adults nearby, I’m sure they will help it out.”

Sure enough, one of the adults walks over to the little chick.

It picks up the chick by its head and stands there for a second, holding the chick in its beak.

It doesn’t let go of the chick.

Instead, it flies off with it.

The adult is chased by the other adult and the chick is dropped in the water.

I can see it trying to stay afloat.

The first adult returns and snatches the chick out of the water.

Still chased by the other adult, it flies out of sight.

Unable to see what happened to the chick, I’m guessing that it has served as a meal.

What started off as a nice and adoring scene turned into a moment of horror for one of the newly borns.

It’s hard enough as an adult Black-headed Gull to have your chick taken by a Lesser Black-backed gull (which happens on a regular basis in this colony), but to have it taken by your own species is a whole different matter.

I’m left wondering about this odd behavior and why an adult would eat a chick. It certainly is not an easy meal for such a relatively small gull.

It reminds me of a 2nd-calendar year Black-headed Gull I once saw trying to consume a Lapwing chick, which took him ages: 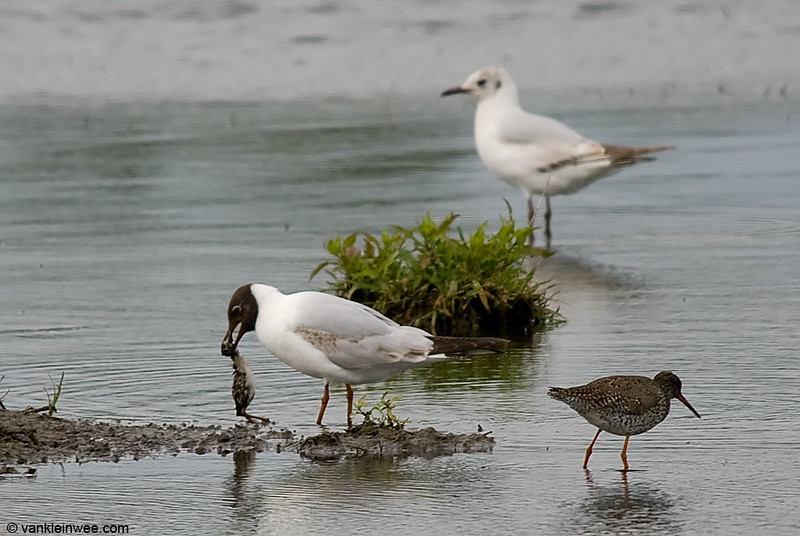