Deciphering the black mark on P9 of Black-headed Gulls

When it comes to Black-headed Gulls (Chroicocephalus ridibundus), one plumage aspect which has intrigued me for some time is a black mark on the outer web of P9* on what appears to be a minority of sub-adult and adult individuals.

Generally speaking, gulls are born with a (dark) brown plumage with dark primaries and a dark tail band which gradually turn into gray wing feathers and white tail feathers after each moult cycle.

The same is true for Black-headed Gulls. The first-generation wing feathers contain much black on the primaries, primary coverts and alula.

From May onwards in the second calendar year, a Black-headed Gull acquires its second-generation primaries. When the full moult is complete, the plumage is identical to that of an adult.

Descriptions of the adult Black-headed Gull plumage in bird guides and other literature mention the presence of a black mark on P9 only briefly if at all and I have not been able to find detailed descriptions of their presence and variation.

I therefore wanted to satisfy my curiosity by holding my own investigation.

Apart from trying to find some kind of indication of the percentage of individuals with a black mark versus those without one, I was curious to find out if the presence of a mark is:

(If you want to know the answers to these questions straight away, scroll down to the summary.)

In order to be able to find out the answers to these questions, I needed a representative group of gulls with a known background.

I found this in a Black-headed Gull colony in Zoetermeer, The Netherlands, where gulls are fitted with a color ring as part of a project which investigates dispersal and longevity in Black-headed Gulls.

The conspicuous color rings allowed me to photograph individuals in flight and identify the individuals based on the  ring code. Photographs were available for the years 2010, 2011 and 2012.

The individuals that were scored were those that had acquired an adult plumage at the time of observation (second cycle plumage and older). This resulted in the following totals:

It is immediately apparent that with only one-third of the individuals scored, not enough data is available to make any hard conclusions. Hopefully I will be able to score more individuals in the coming seasons so that a more precise conclusion can be made.

I was still surprised to see though that in this initial sample the individuals with a black mark outscored those without a mark.

Question 2: is the mark age related?

In gulls, black markings on the feathers of the wing or tail are usually an indication of immaturity.

So can the black mark on P9 in Black-headed Gulls be used to determine the age of an individual and if so, what age would that be?

My data disproves this immediately. From the 46 individuals scored with a black mark on P9, 33 of them (71.7%) were aged as 4th-calendar year or older:

This immediately shows that black markings on P9 are very common among adult Black-headed Gulls.

Incidentally, this 24th-calendar year Black-headed Gull (caught individually and not part of the sample from the described colony) also shows black markings on P9: 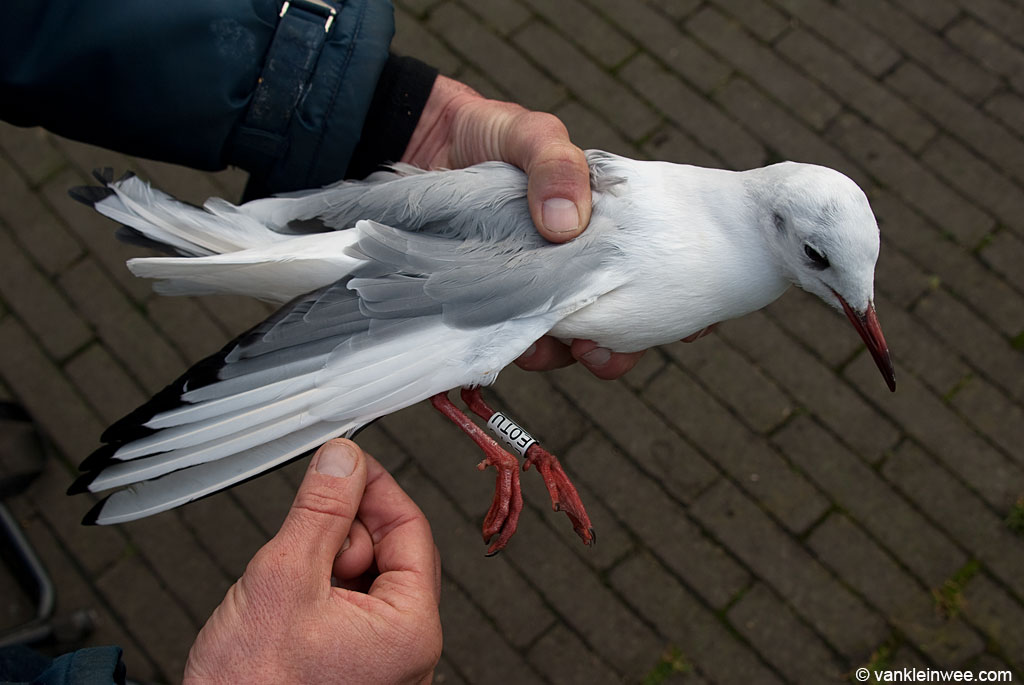 White E0TU, re-ringed as a 24th-calendar year individual (originally ringed as a nestling in June 1988, Delfzijl, The Netherlands). Leiden, 24 December 2012.

A related question that could be asked is whether the size of the black mark changes over time for an individual? Does the size and position stay the same or can changes be detected?

This is a difficult one to answer because it requires detailed photos of the same individual in different moult cycles, taken from the same angle. More photos over more years are needed to come up with a conclusive answer.

One interesting exception though is White E5RH, ringed in June 2010 as a female, aged as after 3rd calendar year. Photos show a clear change in the size of the black mark in P9 on the right wing compared over different moult cycles:

White E5RH in June 2010, showing a large mark on P9 in the right wing. Zoetermeer, The Netherlands.

White E5RH in April 2011, showing a faint mark on P9 in the right wing. Zoetermeer, The Netherlands. 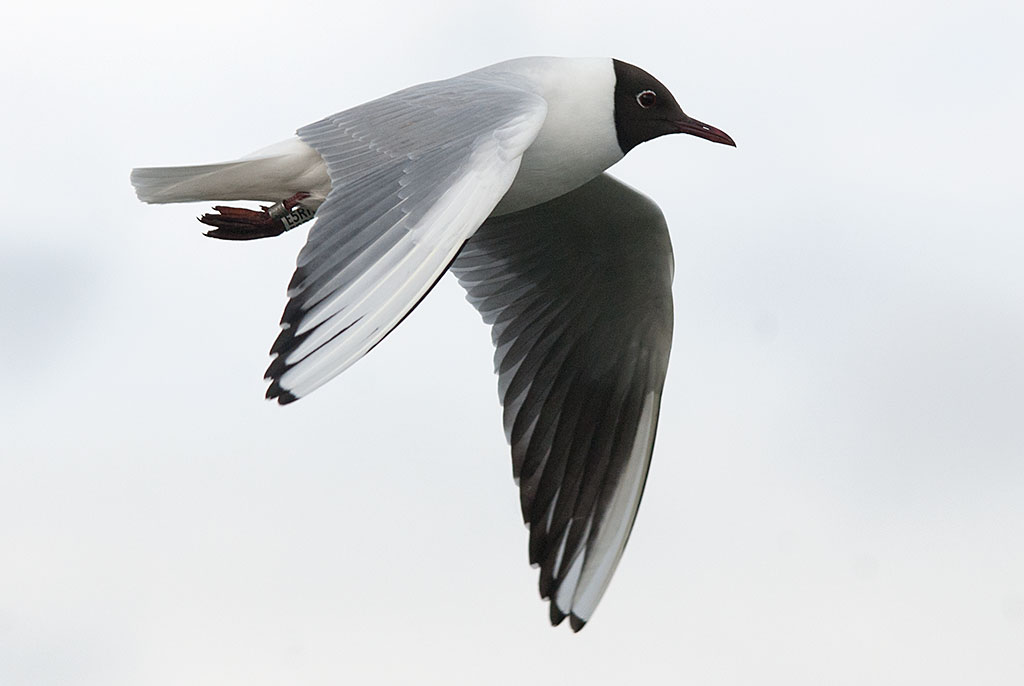 White E5RH in April 2012, showing a small mark on P9 in the right wing. Zoetermeer, The Netherlands.

Question 3: is the mark sex related?

So do black marks occur more in females, males or can no distinction be made?

From the 46 individuals, the difference in sex was as follows:

So even though slightly more males are scored than females, there does not seem to be a clear difference in sex.

Question 4: is the mark genetically determined?

Of course, much more data needs to be gathered to come to any kind of conclusion.

To summarize, here are the answers to the questions I asked myself:

Question 1: Are there more individuals without a black mark than with a mark?

Question 2: Is the mark age related?

Answer: no, it is not. Black marks on P9 can be seen on a wide range of ages.

Question 3: Is the mark sex related?

Answer: from the small sample of individuals there does not seem to be a significant difference between marks present on females compared to males.

Questions 4: Is the mark genetically determined?

Not enough data is available to answer this question yet.

I went into this project thinking that black marks on P9 were not common but even though the figures are inconclusive, they show that they are far more common than I expected. Based on observations of ringed individuals (including those from other colonies than the one used here), I already knew that they are not specific to young adults but it is nice to see it in hard figures now.

My aim is to continue collecting data based on individuals from this colony and hopefully this will shed more light on all of these questions.