First visit to Black-headed Gull Colony of the year

This year’s breeding season has yet to start in earnest, but today I decided to visit my local Black-headed Gull colony to check out the situation in preparation for the coming months.

My last visit was on July 27 last year, closing off a very successful 6-month period of making observations, reading rings and lending a helping hand with ringing young Black-headed Gulls.

Today I found the colony in a very serene state, nothing like the cacophony of sounds that can be heard during the breeding season. 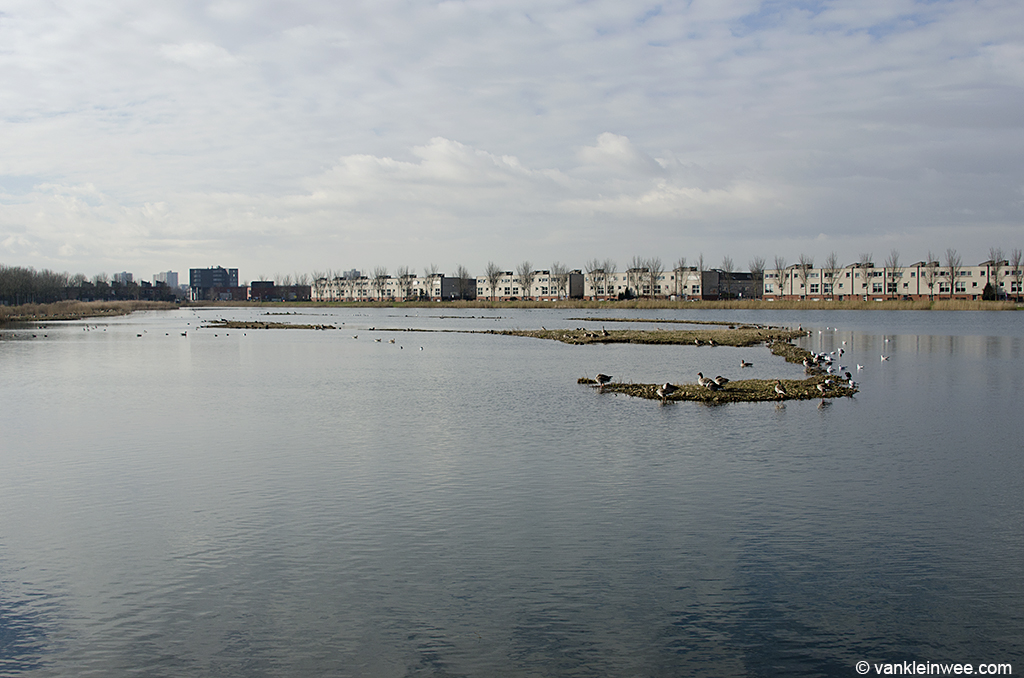 As you can see, the colony consists of a few small, narrow islands on the edge of a small artificial lake next to a suburban area.

The water level is quite high at the moment, covering parts of the colony. Hopefully the water level will drop over the coming weeks to make room for the 600 breeding pairs or so that we expect to occupy this small area.

I counted some 70 Black-headed Gulls present, with another small group of about 40 fouraging on some grassy fields nearby.

The islands very much acted as a resting place today and not as a breeding site: the gulls stood peacefully next to each other and did not interact; a very different site from the quarreling and fighting that will take place in a few weeks time once the hormones will have kicked in.

Some (colour-)ringed individuals were also present, mainly individuals that spend the winter in the local area (as opposed to those individuals that migrate south to countries like France, Spain and Portugal; these birds have yet to return).

Nice returnee was White E5FH which hasn’t been seen since 2 July last year, when it was observed in the colony. Based on observations from previous seasons it also spends the winter in The Netherlands, but this winter it seems to have escaped local ring readers.

Where have you been? First observation of 6th-Calendar year Black-headed Gull since July last year. It was ringed as White E5FH June 2010. Zoetermeer 9 February 2013.

In search of answers

I finished my visit by taking photos of the colony from different angles so that I can use them to document exactly where ringed individuals can be seen displaying courtship behavior and eventually where they build their nest (a project that I started last season).

By collecting such data over various seasons I’m hoping to build up a picture of whether specific individuals always breed in the same location and with the same partner (the expectation is that they do).

Other questions I’m hoping to answer are to do with the date individuals return to the colony and how that relates to the distance to the wintering grounds (do gulls who travel from afar arrive late?) and the quality of the nest location (do gulls that arrive early always take up the prime nesting locations?).

I’m very much looking forward to the coming breeding season and am hoping to get to see many familiar individuals again.