Described are the results that were found so far; more research is in progress to find out the reasons why suspended primary moult occurs for these individuals of this species and to find out more when it resumes again.

This article is also available in Dutch.

This article is a summary, for the full version in PDF format, see ResearchGate.

Primary moult in large gulls is the process of replacing the primary feathers in both wings. In Herring Gulls, this process takes place each year and always follows a particular order: it starts with the smallest primary feather and ends with the largest one. In large gulls this process takes 5 to 6 months to complete and occurs in stages: only one or two feathers are replaced at a time. This is done to conserve energy and to prevent large gaps in the wings that would affect flight dynamics.

When studying primary moult, each primary feather is numbered so that it can be referred to. The primary on the inside of the wing is indicated as Primary 1 (P1), followed by Primary 2 (P2), up to Primary 10 (P10) on the outside of the wing.

In European Herring Gulls, primary moult starts with the smallest primaries P1 and P2. These are dropped in May (sometimes both P1 and P2 at the same time). Once P1 is fully grown and P2 is almost fully grown, P3 is dropped. Once that is almost fully grown, P4 is dropped, and so on. The process of replacing all primary feathers in an adult European Herring Gull is completed in November or December.

In suspended primary moult, some primaries are replaced and grown to their full length while no old feathers are dropped. This results in a wing that contains a full set of primaries in which some are new and some are old. For the birds described in this article, suspended primary moult is referred to when a full set of primaries is observed at the end of June or beginning of July while inner primaries P1 and P2 are known to have been replaced and are (almost) fully grown, and P3 and all other primaries are still in place.

Since 2007, gulls in this colony are studied by fitting them with a colour ring and a metal ring during the breeding season so that they can be individually followed. The colour ring consists of a large dark green ring with a white four-letter code starting with ‘Y’. Adults as well as juveniles are ringed.

In the months of April to July of each year, the colony is visited once, sometimes twice a week. During visits in the breeding seasons from 2014 to 2017, detailed photographs of individual gulls were taken and the progress of their primary moult over multiple seasons was compared.

For 5 birds for which no moult data could be obtained prior to the observation of suspended moult, the inner primaries appeared newer than the outer primaries (difference in colour and wear). It is presumed therefore that these inner primaries have also been replaced earlier in the season.

For 6 birds a full set of primaries was recorded at the end of June or the beginning of July but it could not be confirmed if active moult had taken place earlier in the season.

From the data collected, the following can be derived:

For the group of gulls for which active moult was observed in the beginning of the season it is clear that the moult did indeed start, that the replaced primaries were grown to (almost) their full length and that the moult of the remaining primaries was suspended to later in the season.

For the group of gulls in which no moult score could be obtained earlier in the season but for which a clear difference in appearance could be seen between the inner and outer primaries, it is assumed that these primaries have also been replaced.

The group of gulls for which no moult status could be determined cannot also be safely placed in this group. References in literature namely suggest that some Herring Gulls start their primary moult as late as July. More research is therefore needed to find out if this is also the case for this last group of gulls in this project.

Based on the references found in literature so far it turns out that little is known about suspended primary moult in this gull species. Cases of individuals showing active moult earlier in the season and suspended moult later in the season have not been come across.

In contrast, suspended primary moult is well known in a related species: the Lesser Black-backed Gull (Larus fuscus). Compared to European Herring Gulls, the majority of adult Lesser Black-backed Gulls start their primary moult later in the season (June/July). They typically only replace inner primaries P1 and P2 and then suspend the moult until they have reached their wintering grounds in southern Europe (Portugal/Spain), or northern Africa (Morocco). Because of these large migration distances, suspended primary moult benefits them because it is more efficient to fly with wings that do not contain a moult gap.

When it comes to suspended primary moult in adult European Herring Gulls, the following questions can be asked.

Why suspended primary moult in European Herring Gulls has gone mainly unnoticed is to do with various aspects:

The reason why adult Herring Gulls suspend their primary moult is yet unclear. The historical context of suspending primary moult (avoiding a gap in the wing during migration) should not apply to Herring Gulls because they are not true migrants: the distance to their wintering grounds is at most a few hundred kilometers and traveling takes place in stages rather than in one direct flight. The presence of a moult gap should therefore not be a restricting factor. Suspending the growth of feathers could be related to energy conservation during the breeding process (chick care). Because food availability and breeding success differs each season for various reasons, it would explain why primary moult is suspended in some seasons but not in others. Further research is therefore needed, especially into the group of Herring Gulls which — as the literature suggest — do not start their moult until July.

When looking at the sex of the observed gulls we see that suspended moult was observed in more males than in females. From the 21 individuals, 13 were male (62%) and 8 were female (38%). Before taking any conclusions though about sex differences, more data of more individuals is needed and this data should be compared with the reason why suspended primary moult occurs for these individuals.

Finally, it should be considered if the moult progress that is observed should be described as delayed moult instead of suspended moult. It could be that the moult progress is delayed to such an extent that the next primary is kept in place longer than what is thought to be the norm, even when the preceding primary is (almost) fully grown. This could certainly be an option for those individuals in which the inner primaries do not completely line up to form a neat trailing edge (see YASB image 5, YBAU image 8, YBRD image 29, YBVB image 32, YBVB image 34, YCBF image 35).

The aim therefore is to continue this project over the coming years to get a better understanding of this phenomenon.

Few references can be found in literature about suspended primary moult in adult Herring Gulls. None of these include examples in which known individuals are shown with active moult early in the season and suspended moult later in that same season. Typically, individuals are discussed that have a full set of primaries at the end of June or beginning of July whereby delayed moult is given as a possible cause.

Coulsoni et all 1983. Seasonal changes in the Herring Gull in Britain: weight, moult and mortality.

We thank PBN and Stichting Forteiland for allowing us to visit the Forteiland and for being able to study the gulls that are breeding there, Kees Camphuysen (NIOZ) for providing the colour rings for the Lesser Black-backed Gulls and Herring Gulls and for sending out the life histories to all observers, and Mars Muusse for his valuable feedback on the first draft of this article.

The following table shows the moult status at the end of June/beginning of July for the seasons 2014 – 2017 for those adult Herring Gulls in which suspended primary moult was recorded during this period.

Appendix B – Data of each individual

This appendix contains an overview of one individual Herring Gull for which suspended primary moult was recorded.

Moult scores were obtained by studying more photos than are shown in this article.

Note: an overview of all individuals can be found in the PDF version of this article on ResearchGate.

The primary moult score (PMS) is obtained by assigning a value to each primary:

The values of all feathers are then added up to give a total score.

Male Herring Gull Green YBRD was caught on a nest on 2 June 2014, aged older than 4 calendar years (however, because of a central tail feather with sub-adult markings it was possibly a fifth-calendar year bird, or at the least a young adult). 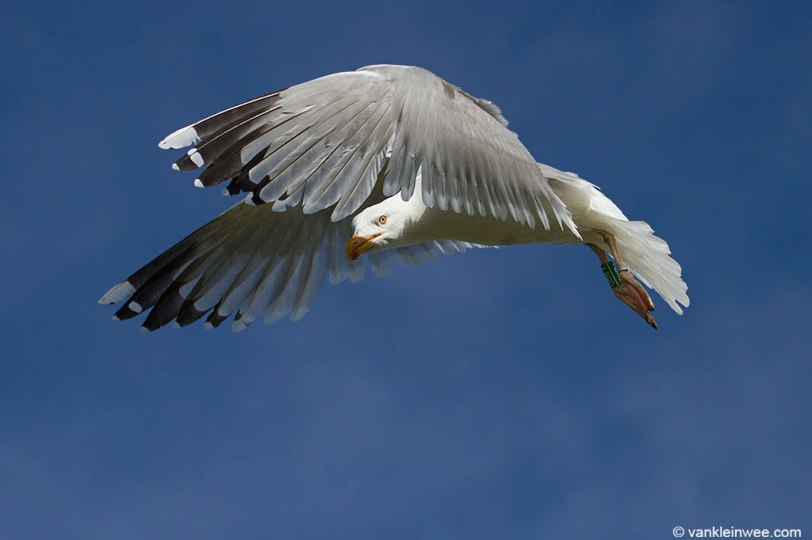 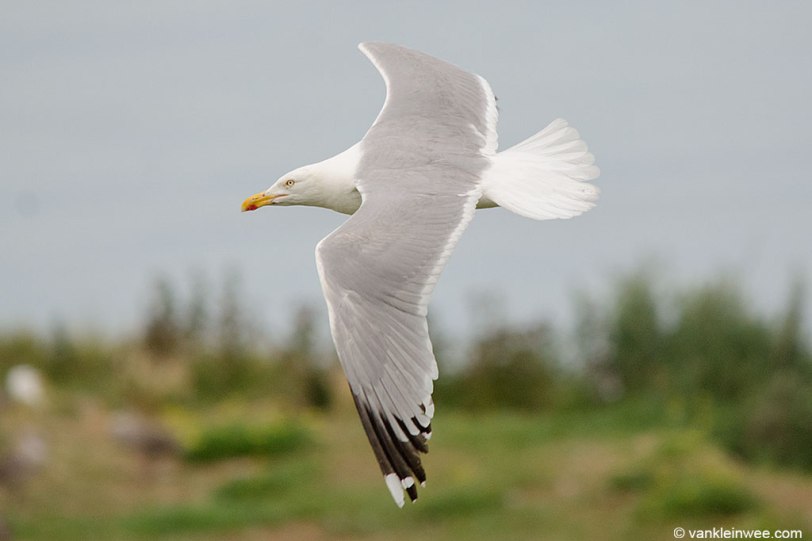 Image 31. IJmuiden Forteiland, 10 July 2017. Green YBRD with suspended primary moult: all primaries are present. The exact moult could not be determined; it might even be that P4 is almost fully grown.

This article is a summary, for the full version in PDF format, see ResearchGate.