I’m happy to announce the release of the Marked Birds Database version 2.5.0. It contains new features, various improvements, some changes, and fixes.

Existing users: please continue reading until the fixed issues section, it contains information that may affect you.

For a full list, see the bottom of this article.

A link to the download file as well as instructions about installing, setting up and using the database can be found on the Marked Birds Database page.

Users who are using a previous version can import their data into the new version.

Two new features have been added: support for tracking bird relations, and a Visual Display for ELSA rings.

The introduction of tracking relations between birds makes the database almost (if not fully) feature complete. I believe it is now a broad and solid platform for tracking ringed birds in detail.

It is now possible to track the different relations between birds such as partners, offspring, siblings and so on.

This can be done for known birds that already exist in the database or for unknown birds (such as birds that are unringed or that are ringed but where the code has not yet been read). When creating a relation, the reverse relation for the other bird can also automatically be created.

Relations are tracked based on the year in which they took place. This makes it possible to for example follow which partner a bird had for each year. For relation types other than ‘partner’, the birth year can be used.

For a detailed description, see Working with bird relations. 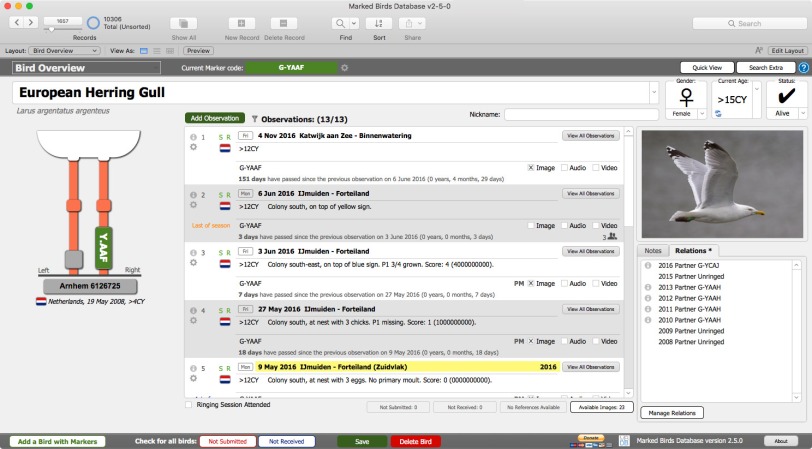 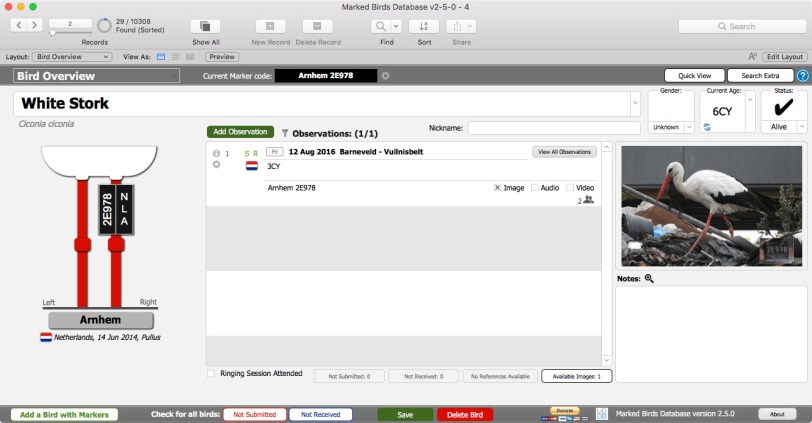 It is now also possible to manually add White Storks that are fitted with ELSA rings:

The Visual Display for ELSA rings is also automatically assigned when using the BirdRing app and the form for ELSA rings has been used. It can also at any time be assigned manually.

Various improvements have been made.

The overview that shows all observations of a particular date now shows a flag of the country in which the bird was ringed. This makes it much more visible where the birds originated from. Use the sorting option to group together all birds per country.

It is now possible to more easily see and access this information. This is done by two groups of buttons that have been added to the Bird Overview screen. They are labelled ‘Not Submitted’ and ‘Not Received’.

One group of buttons show the totals for the currently viewed bird; clicking either will show a popover with the related observations in which the Submitted or Received buttons can be clicked. Use the Close button to update the totals in the button labels.

Another group of buttons at the very bottom of the screen brings up a report related to all birds in the database. This is basically the Search Extra Observations screen.

Various changes have been made.

The ringing information that is displayed below the Visual Displays has changed as follows:

Because of the new implementation of tracking relations, the following has been removed:

Adding a Marker and Event

The form for adding a Marker and Event to an existing bird has been simplified: it now always shows all fields; ignore those that are not applicable to the bird that you are adding. For example: when adding a bird which only has a metal ring, ignore the fields that are to do with colour rings.

Upgrading from a previous version

When upgrading from a previous version, the database now needs to be closed before it can be properly used.