How to score primary moult in gulls

During the International Gull Meeting in Spain this year, I gave a presentation about primary moult in adult European Herring Gulls. I was happy to see afterwards that there was a lot of interest in this subject from various attendees from all over Europe. Some of them also indicated that they wanted to start keeping track of primary moult in the the gulls that they observe.

When moult is scored at different locations, it is important that this is done by using the same method so that the results can be compared.

In this post I will explain how primary moult is scored and what it can tell you about a group of gulls.

When studying primary moult, each primary feather is numbered so that it can be referred to. In gulls, numbering starts on the inside of the wing. 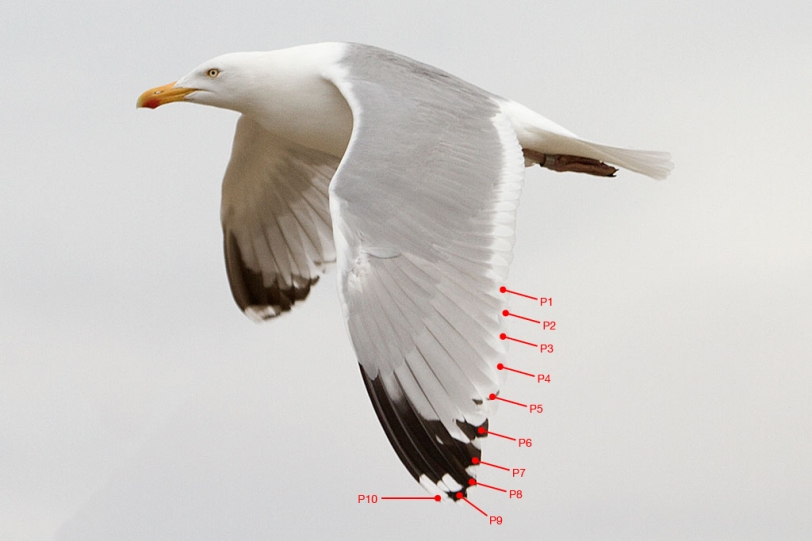 The primary moult score (PMS) is obtained by assigning a value to each primary.

I use the following well-known scoring system:

I have also come across the following system (as per the BTO Guide 1983, Moult in Birds by Ginn & Melville), in practice I don’t think there is much difference with the method above:

(The method in the BTO Guide replaces the value 5 with the letter N. The above score would then be ‘N400000000’. Personally I prefer using all numbers instead of adding an extra variable such as ‘N means 5’.) 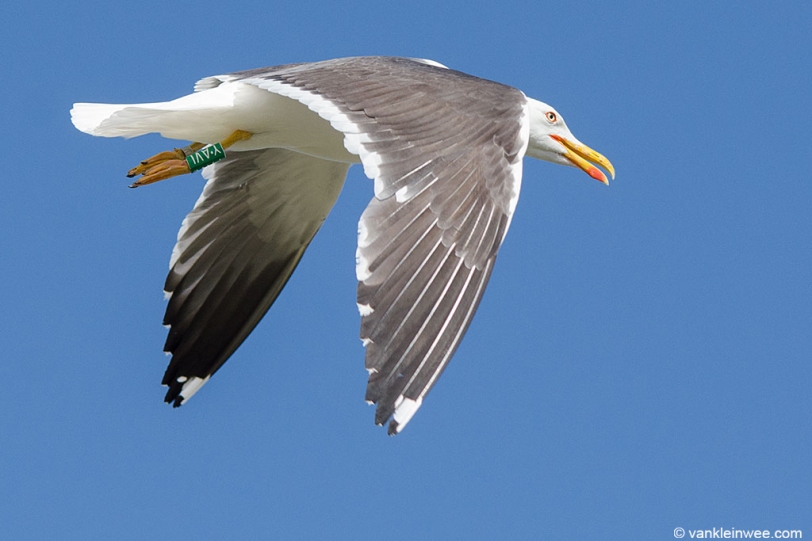 The main challenge in scoring the primaries is of course getting a good view of the wing. The best method is to take clear photographs, preferably of the gull in flight so that the wing is viewed when fully stretched. Ideally, a high enough shutter speed is used to prevent motion blur.

The other challenge is interpretation: how long is ‘a quarter grown’ or ‘half grown’. This can be subjective and even with practice, differences can occur. Here, good photographs again play an important role so that they can be re-evaluated, or evaluated by other people.

Keep in mind also that when you are able to score a bird in the hand that this will result in a much more accurate score than when having to calculate the score from a photo. Especially when it comes to the inner primaries for example you will be able to see if a feather is scored as 1 (missing/just growing) or as 2 (a quarter grown). However, the effect on the final result will be minor and when plotting many results in a graph it will hardly affect the median, if at all.

The simplest way of keeping track of primary moult is by using a spreadsheet. I advise to at least use the following columns:

You might also want to keep track of the primary score of both wings because there might be differences. Alternatively, take the highest score.

When using my Marked Birds Database you can keep track of primary moult as part of an observation.

What to do with primary scores

Keeping track of any kind of data allows you to discover trends: is what you are tracking always the same or are there differences? In case of differences: do these occur in individuals (over seasons), age groups, different populations (ranging from nearby to those abroad), or similar (gull) species? Being able to compare such data can give valuable insight into the differences between individuals and species.

I would be very interested to find out in what way this occurs in other (Herring) gull species around the world. To do this, primary moult needs to be recorded on a large(r) scale.

Now you know how to do this yourself.

4 thoughts on “How to score primary moult in gulls”