I’m happy to announce that thanks to the effort of the staff of the University of Amsterdam, our adult Lesser Black-backed Gulls that are fitted with a GPS-logger can once more be followed online.

Please visit http://www.uva-bits.nl/project/daily-movements-of-gulls-from-forteiland-ijmuiden/ and use the map on the right side to see the latest tracks. (Note: while the data is downloaded on the return of a bird, data from previous months can first be seen; any tracks from September 2019 onwards is new data.) 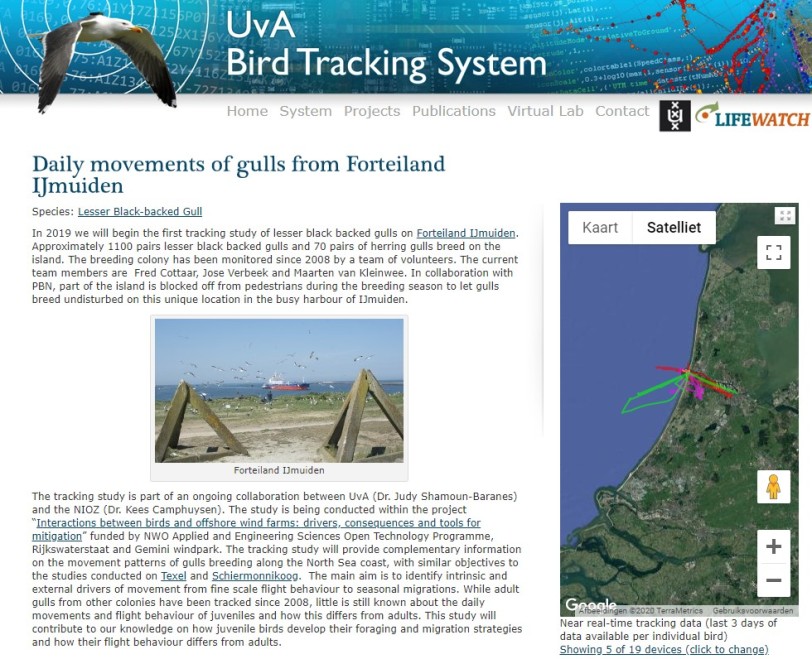 Out of the 10 adults that were fitted with loggers in 2019, 3 have returned at the time of writing.

YBHM with logger 5962 was observed by us during our first visit to the colony at IJmuiden Forteiland on March 16, standing in its territory. We were happy to see that both the gull and the logger were in excellent condition. 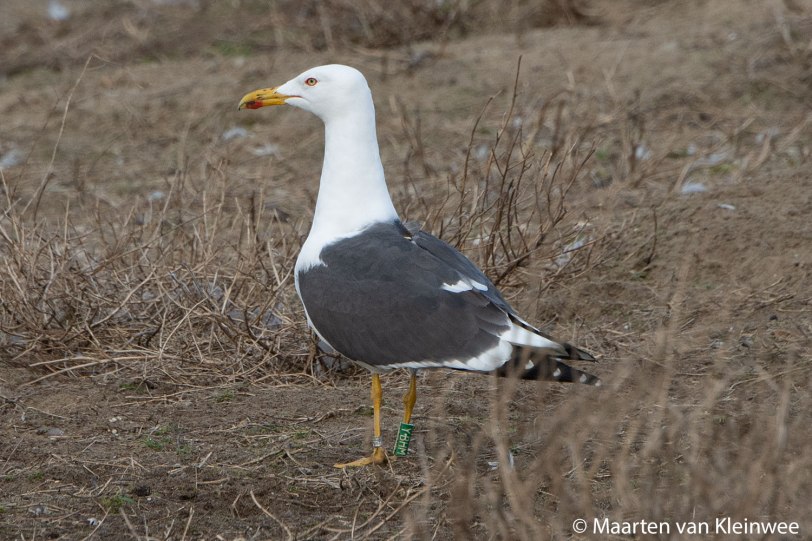 The tracks confirmed what was already reported by local birders over the previous years: that it spends the winter at the harbour of Castellón, Spain.

The current tracks from March 26 – 28 show that it too has visited its favourite spot in Amsterdam again and has been spending time out at sea as well.

YASV was also seen by us in the colony on March 15, but the data has not been downloaded from the logger yet.

YBJC is one of our most famous gulls because of its almost daily visits to the city of Amsterdam.

The logger has revealed that it spends its winter in Safi, Morocco (a place I have visited myself twice), and shortly stays at Málaga, Spain on its way back (something we were already aware of thanks to valuable reports from a local ring reader).

YBJC has been back in the Netherlands for some 10 days and has taken up its usual daily trips of visiting Amsterdam, with the odd sea-trip in between. 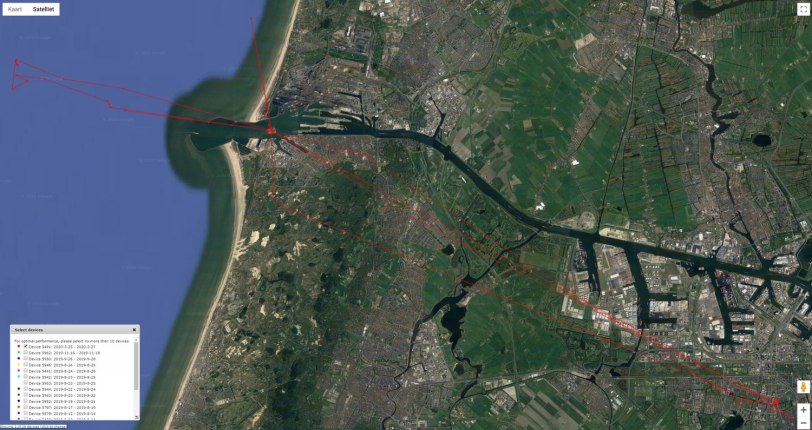 Of the gulls that were fitted with a GPS logger as a juvenile in 2019, one has moved from its last reported position.

YCZN/#5942 moved to Fuente de Piedra, north of Málaga, Spain, from Madrid in early March, but has now moved back to Madrid.

The tracking study is part of an ongoing collaboration between the University of Amsterdam UvA (Dr. Judy Shamoun-Baranes) and the Royal Netherlands Institute for Sea Research NIOZ (Dr. Kees Camphuysen).

The study is being conducted within the project “Interactions between birds and offshore wind farms: drivers, consequences and tools for mitigation” funded by NWO Applied and Engineering Sciences Open Technology Programme, Rijkswaterstaat and Gemini windpark.

The tracking study will provide complementary information on the movement patterns of gulls breeding along the North Sea coast, with similar objectives to the studies conducted on Texel and Schiermonnikoog.

The main aim is to identify intrinsic and external drivers of movement from fine scale flight behaviour to seasonal migrations. While adult gulls from other colonies have been tracked since 2008, little is still known about the daily movements and flight behaviour of juveniles and how this differs from adults.

This study will contribute to our knowledge on how juvenile birds develop their foraging and migration strategies and how their flight behaviour differs from adults.

If you come across any of our gulls from the IJmuiden Forteiland project, please let us know.