For me, one of the most fascinating aspects of gull watching is observing their behavior. It is a totally enriching experience and it extends the process of just watching an individual to knowing what it is doing and why it is doing it.

As is the case for most other birds, gulls communicate by means of a fixed set of postures and calls. Depending on the context in which they are used, these can have a particular meaning.
These postures and calls are shared by all gull species, although some species have a few postures or calls which are specific for that species only.

In my quest of finding out more about gull communication by studying gulls in the field and by researching various sources of information, I will discuss each type of communication in a series of posts. It will also give me an incentive to go out and record that particular behavior so that I can share it here.

First off: the forward posture.

The Forward posture is used in the following situations:

The posture is very common in hooded gulls and can be used both on land and in the water. Even though it is used in disputes, it rarely precedes an attack. When used in hostile encounters on land, it often includes running towards an opponent, whereas in a pair formation sequence both gulls move parallel to each other.

The forward posture is related to the oblique posture in which the body is held in a diagonal fashion (to be discussed in a later post); both postures are often alternated.

In his book The Animal in Its World, Niko Tinbergen characterizes this type of behavior as a ‘spacing-out’ display or ‘threat’ display, directed at opponents with the aim to move them away or to stop their advance.

Body position
As the name implies, this posture is all about displaying a forward motion by holding the body roughly horizontal or slightly diagonally with the neck kinked characteristically. The tail can sometimes be spread; the bill is either slightly opened or closed.

A Black-headed Gull in winter (basic) plumage in the forward position with the neck in a characteristic kink. Leiden, The Netherlands, 11 January 2009.

The use of this posture in an aggressive context can be recognized by the carpal joints being raised and the wings lifted from their supporting flank feathers. Lifted wings are an indication that these are ready to be used to strike out with.

An adult Black-headed Gull in summer (alternate) plumage in the forward posture with  the carpal joints raised and the wings held slightly away from the body. Leidschendam, The Netherlands, 13 June 2009 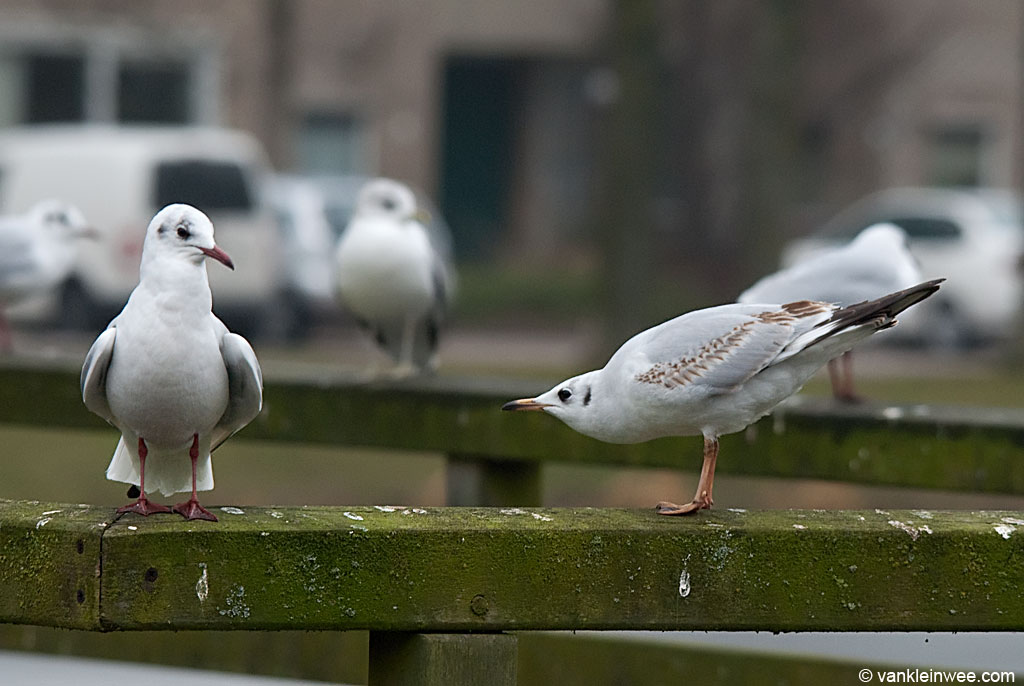 A 1st-calendar year Black-headed Gull (right) in a forward posture aimed at an adult Black-headed Gull. The adult responds aggressively by adopting an oblique posture with the wings lifted. Leiderdorp, The Netherlands, 21 February 2010.

A Black-headed Gull in a forward posture during a meeting ceremony with a mate. The tail is slightly spread. Leiden, The Netherlands, 10 December 2010.

Forward posture in other gull species (in alphabetical order):

The Animal in Its World – Niko Tinbergen, third printing 1975

Birds of the Western Palearctic interactive