Meeting Up With an Old Friend

Most bird watchers will have a favorite  species that they prefer watching over other species, based on attractiveness (raptors for instance) or perhaps rarity.

Bird watchers who keep track of ringed individuals (such as myself) are very likely to have a favorite individual bird, for instance because of the circumstances under which they have caught or seen this bird, or the history of the bird.

The first time that I saw ZDGA was on 20 June 2009, now almost 3 years ago, and I have been fortunate to observe him on 59 different occasions since then.

My first encounter with European Herring Gull ‘ZDGA’, sitting on top of a bridge in the distance. Leiden, The Netherlands, 20 June 2009.

I will write up another post on all my encounters with ZDGA, but my reason for this post is that this is my first observation since 7 April, 38 days ago.

This is unusual because in the previous 2 breeding seasons I used to see him at least once every 2 weeks. I was therefore starting to get worried lately about his well being.

During one of my regular gull-watching rounds through the city today, he appeared all of a sudden when I was feeding a group of Lesser Black-backed Gulls together with my friend and fellow birder Jan Z. Jan had laid pieces of French bread on a jetty on which ZDGA suddenly appeared. 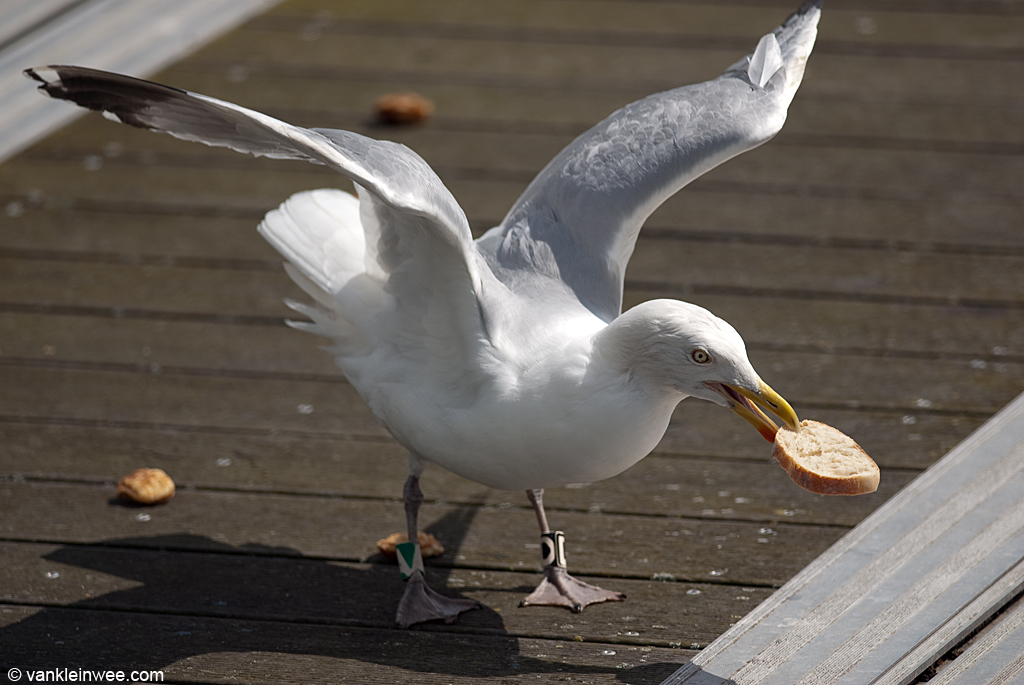 He spent less than a minute to work down one piece after which he flew off again.

European Herring Gull ‘ZDGA’, trying to work down the large piece of french bread. Leiden, The Netherlands, 15 May 2012.

European Herring Gull ‘ZDGA’. After finishing the bread in less than a minute, it flew off again. Leiden, The Netherlands, 15 May 2012.

The photos clearly show a thinning patch on the right-hand side of his neck, something which he shows every year. Also, he is starting to drop his inner greater primary coverts, perhaps a sign that the primary moult is imminent?

It was only a brief encounter, but it is very good to know that he is still around. Hopefully he will show himself more over the coming weeks.

2 thoughts on “Meeting Up With an Old Friend”