I was observing gulls at the beach of Katwijk aan Zee, the Netherlands this morning, where activities are still ongoing in an effort to raise the level of the beach as protection against the sea.

Because the deposited sand is full of seafood, thousands of gulls (mainly European Herring Gulls Larus argentatus argenteus) congregate at the beach to find an easy meal.

I have been observing such scenes since activities began in October 2013, but I noticed some new behavior for the first time today: 1st-winter Herring Gulls begging and harassing adult Herring Gulls up to the point where the adult would regurgitate food.

This reminded me very much of the scenes that can be seen up to a few weeks after the breeding season when adults feed their young until they are old enough to look after themselves.

On 2 occasions I saw a group of 10 – 15 young Herring Gulls display begging behavior and generally harassing and chasing an adult Herring Gull until it would regurgitate food. While regurgitating, the adult was completely surrounded by the group.

Interestingly, the response of the adult was an aggressive one: it would immediately perform long-calls and make charges at the group.

In the following scene, a female Herring Gull (ringed as Green F.ANK in 2012 at Texel, the Netherlands) is the point of interest for the young gulls. 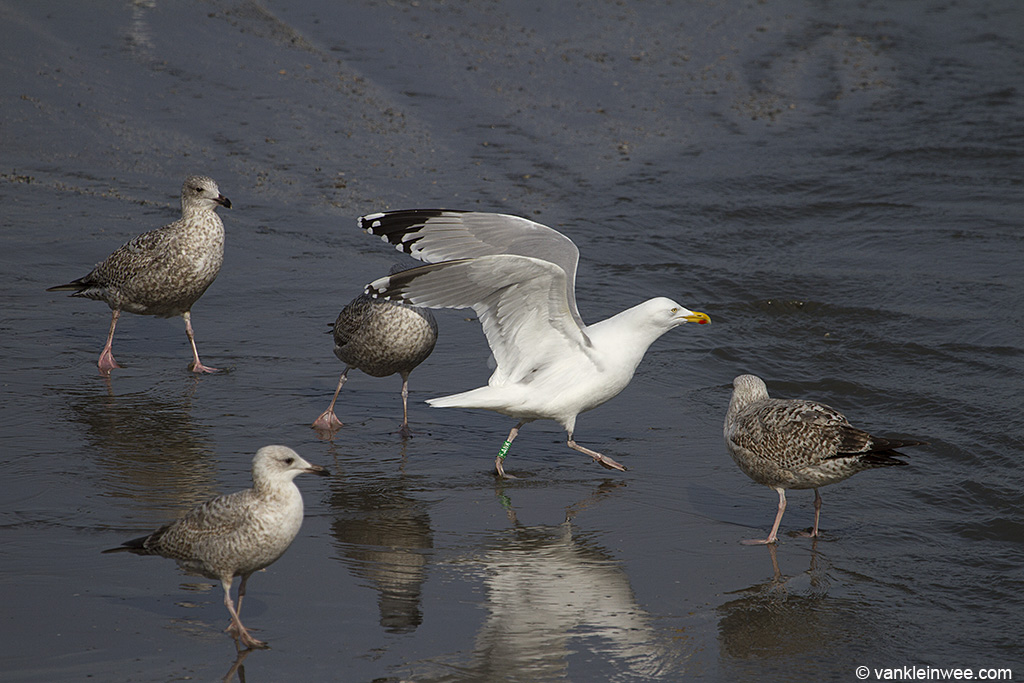 Green F.ANK trying to flee the scene in an effort to get rid of harassing 1st-winter Herring Gulls.

After having been followed by the young gulls, they harass her up to the point where she regurgitates food. This is immediately eaten by the youngsters. Her response is to react aggressively, here by performing a long-call. Note how she aggressively holds her wings away from her body. 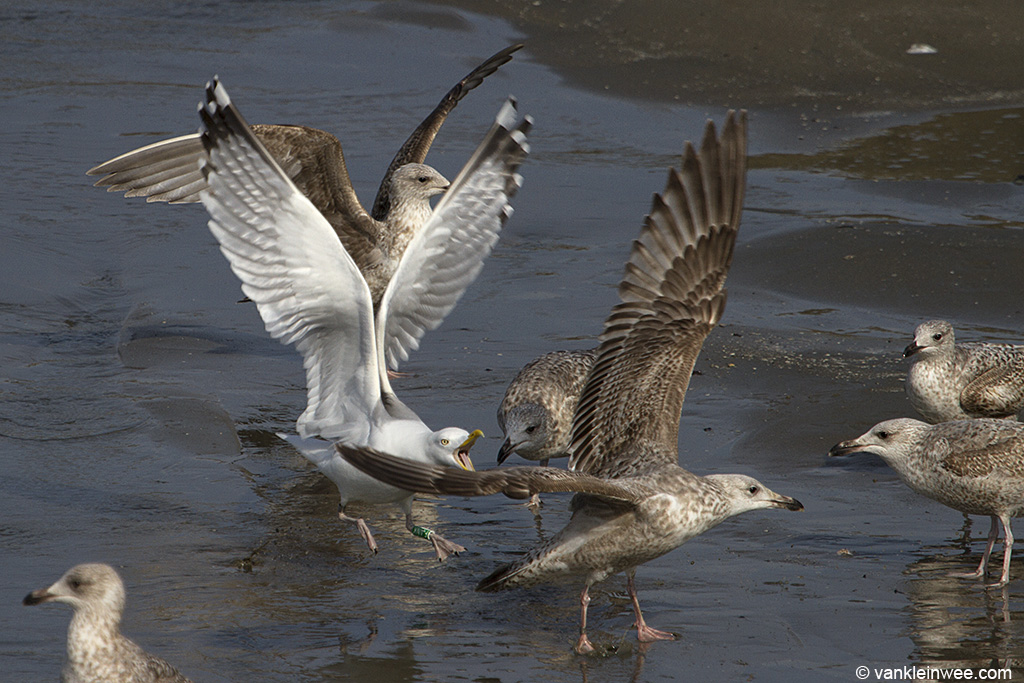 The long-call is followed by charges at several individuals.

Knowing that this adult is a female might explain the aggressive response: she is unable to ignore the begging signals but at the same time knows that these are not her offspring. What is more, during this time of year it is she who is supposed to display begging behavior when going through the process of (re-)bonding with her partner. Very much a case of mixed feelings… 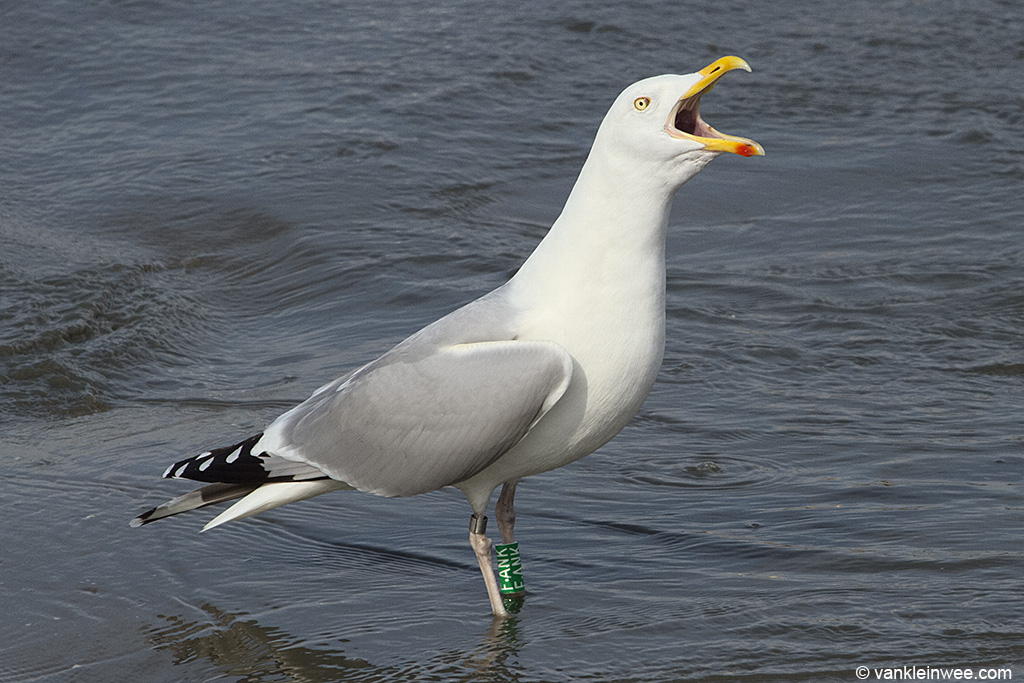 F.ANK long-calling aggressively (note the wings held away from the body). 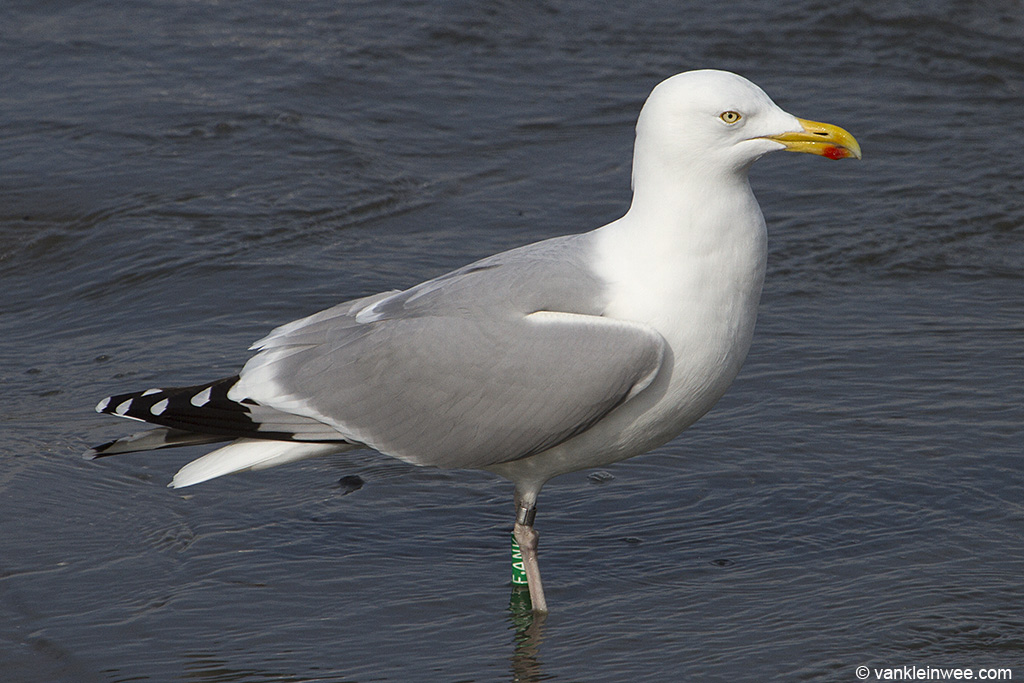 F.ANK a little more at rest, but note the wings held away from the body: a sign of unrest or aggression.