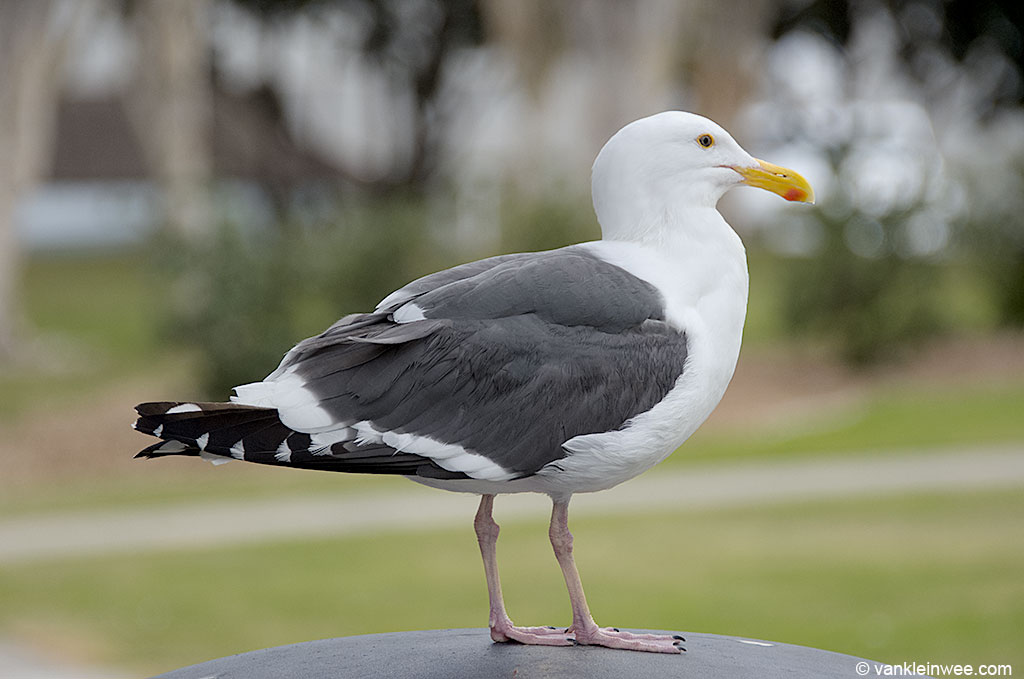 During my stay in San Diego in April (see San Diego Trip Reports), the most abundant species present was the Western Gull (Larus occidentalis).

It’s a beautiful, large gull with dark eyes, pink legs and a bill with a distinctive bulbous tip. Adults are easily recognizable due to the fact that they are they only gull in their range with such a dark plumage.

Although it was the main species that was present, numbers were quite low during my visit. I stayed near the Sea Port Village (mainly the area between the Convention Centre and the USS Midway) and I don’t think I saw more than 30 gulls a day or so.

One reason I think this was caused by was that the area is heavily dependent on tourism and was therefore kept very neat and tidy. Feeding birds was a big no-no and apart from the odd picnicker feeding them scraps, there was just nothing for them to feed upon.

That didn’t mean that they were not in the area though. After returning from a whale-watching trip one day we came past a fishing vessel in the Bay area which was followed by a few hundred Western Gulls or so.

Out of all the age groups, 2nd-calendar year olds were present in the highest number. 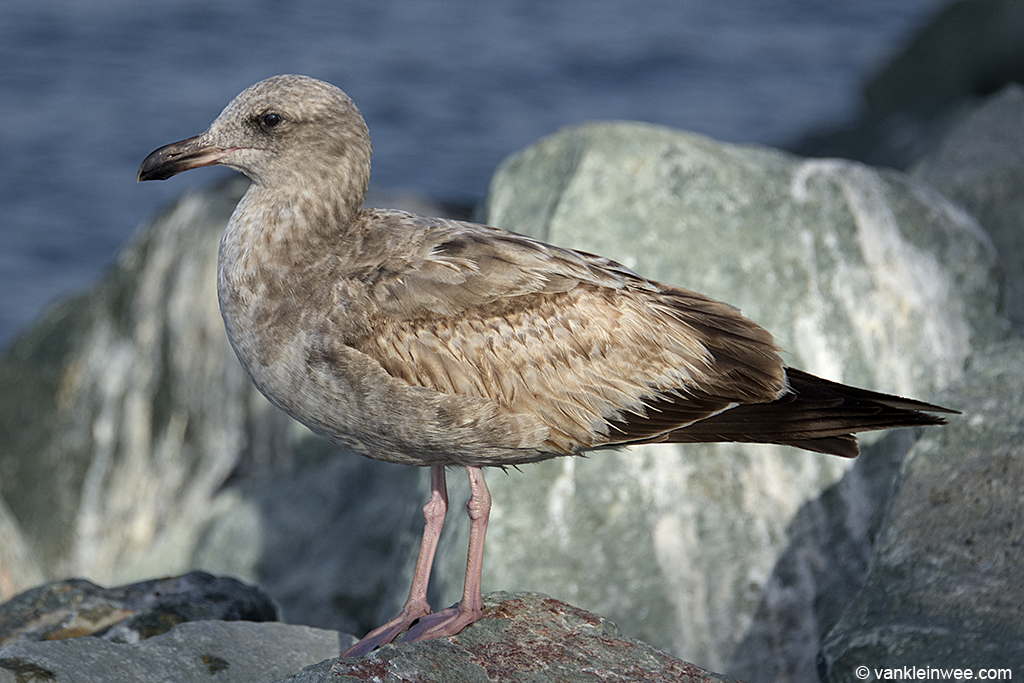 Rather typical second-calendar year Western Gull moulting to second-prebasic plumage.
Note the dark second-generation feathers on the head and in the neck, breast, flanks, mantle and scapulars. Some of the inner median coverts have been dropped, thereby exposing the base of the underlying greater coverts. The brown, first-generation feathers are worn with abraded edges. San Diego, USA, 9 April 2013. 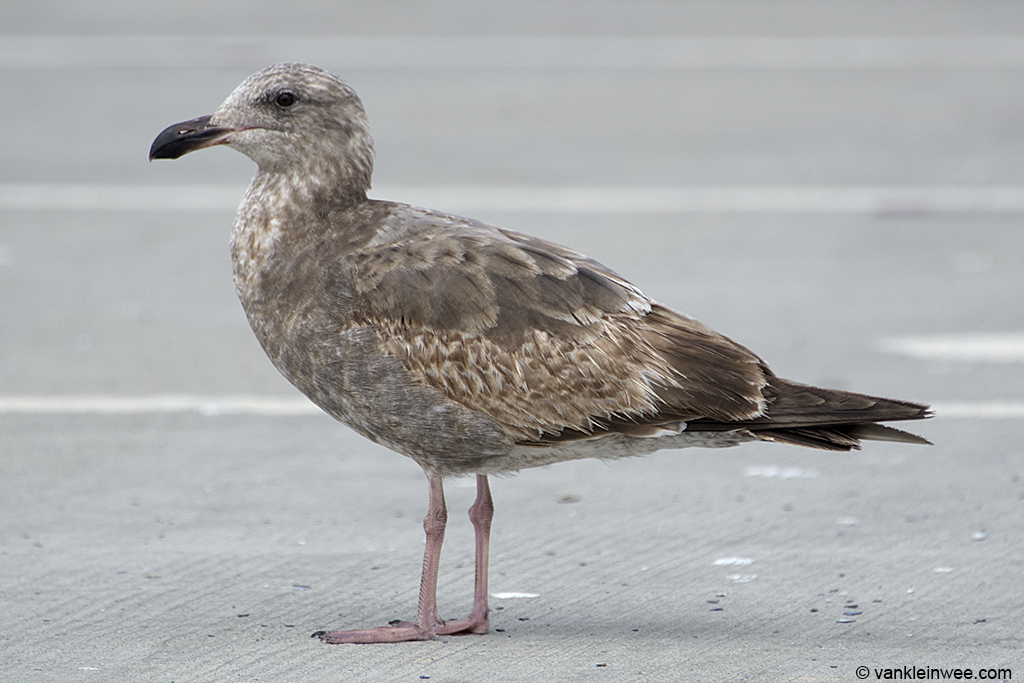 When analyzing my photos afterwards, I was actually surprised to find out that I had photographed some 40-odd individuals of this age, proving that there was a high turn-over of individuals.

Plumage-wise, what struck me most was their heavily streaked head. 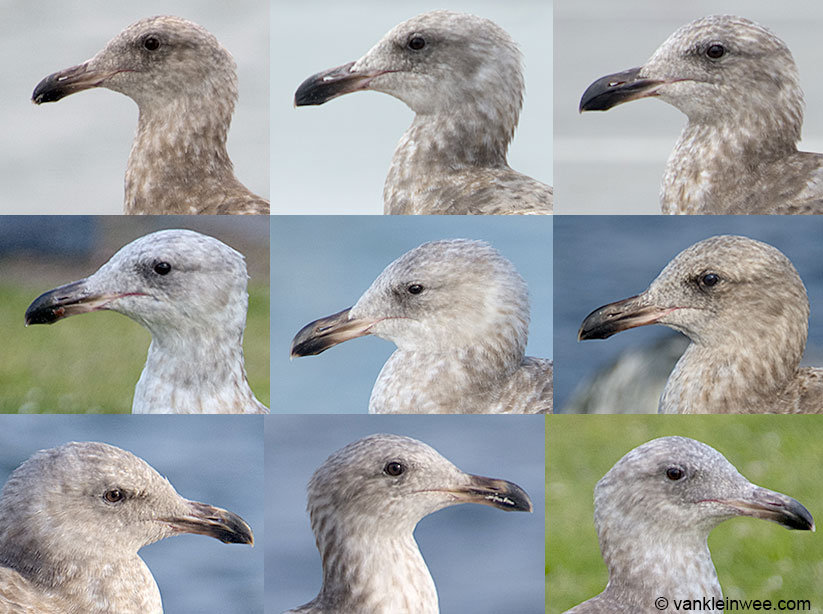 Almost all individuals had started their moult to second pre-basic plumage (the start of their second cycle plumage), which was obvious by the median coverts that had been dropped and the dark, second-generation scapulars (and sometimes median coverts) that were visible. 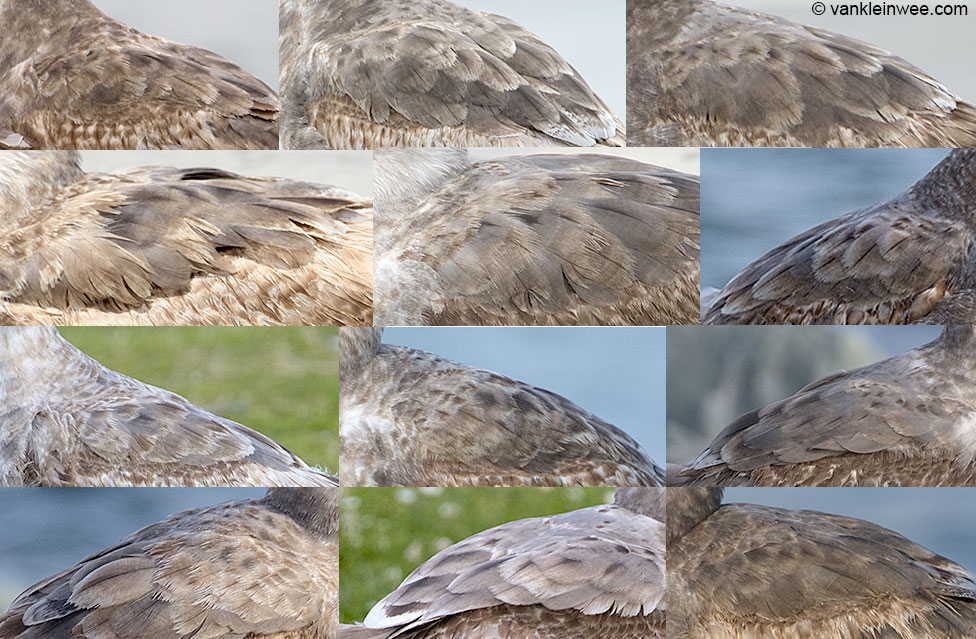 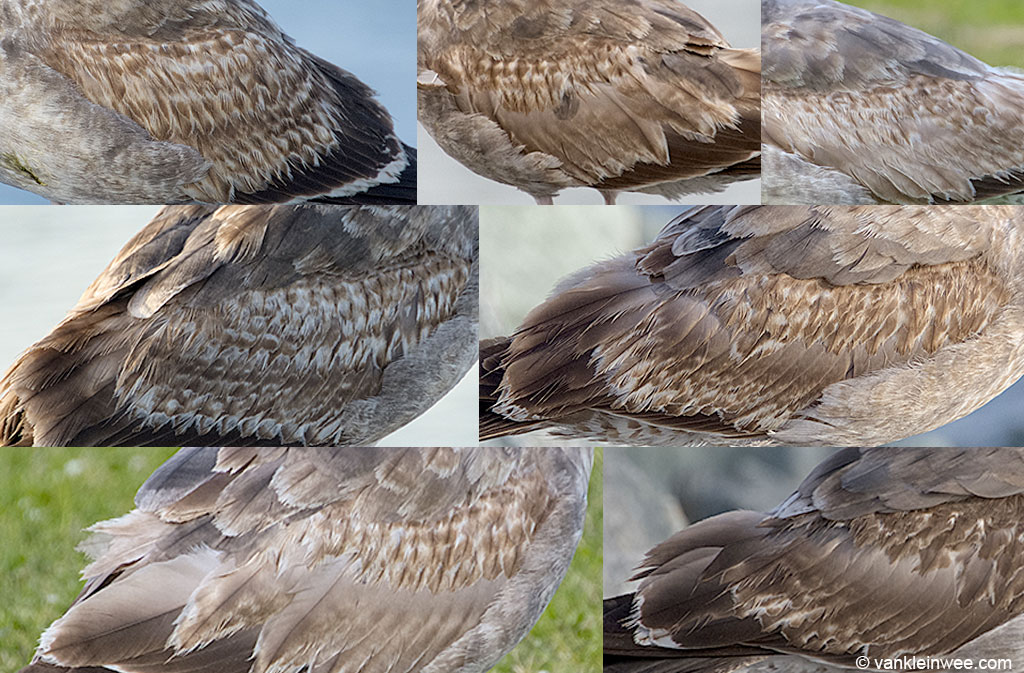 Exceptions to the rule

As ever with gulls, some individual stood out because they didn’t conform to the general rule. 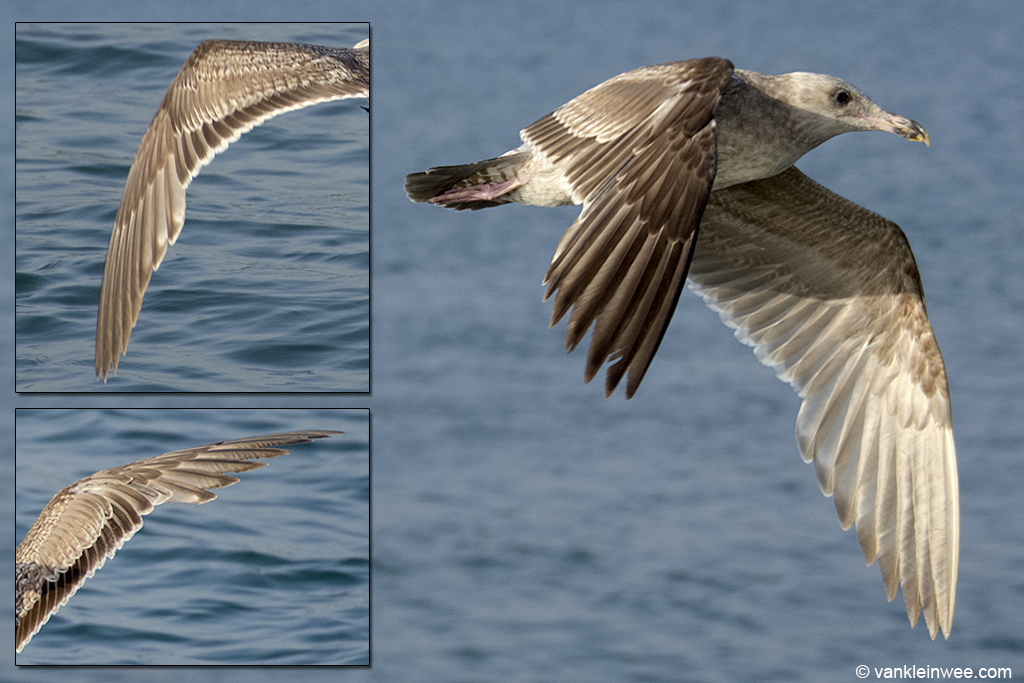 Second-calendar year Western Gull moulting to second-prebasic plumage. A very advanced individual with a pale bill base and yellow in the bill tip. In flight, it showed an uneven moult pattern in the inner primaries: in the left wing, P1 and P2 had been dropped with P3 – P10 present while in the right wing the new P1 and P2 were already clearly visible, with P3 missing and the remaining primaries present. San Diego, USA, 9 April 2013. 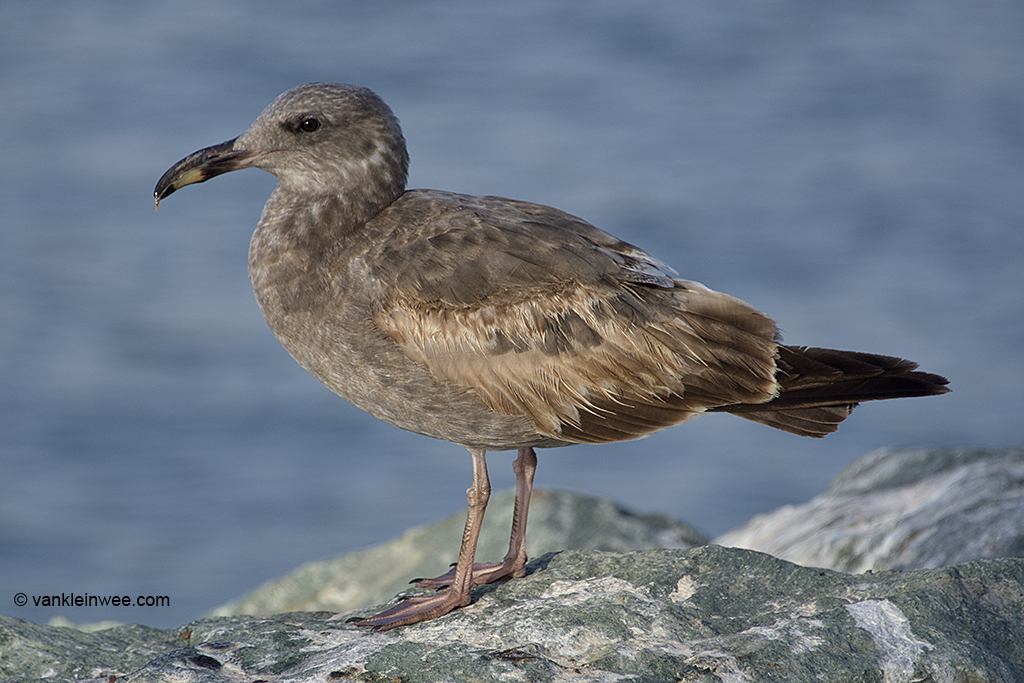 More photos of second-calendar year Western Gulls can be seen on my Flickr page.

Videos of second-calendar year Western Gulls can be seen on my YouTube channel.

I came across several third-calendar years (some 15 or so), which could be aged by a mix of adult characteristics (mostly yellow bill, hint of a red gonys spot, yellow orbital ring, and pink legs), and sub-adult characteristics (brown wing coverts and primaries without mirrors or apical spots).

The range in gray tones in the scapulars was a first indication of the existence of the 2 subspecies of Western Gull: 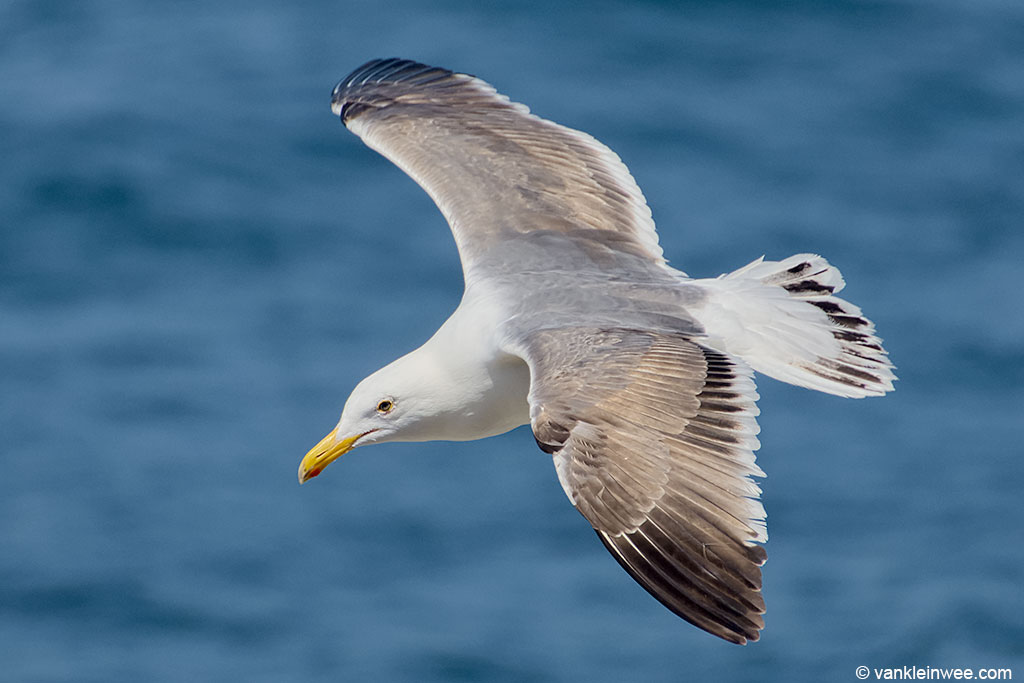 Third-calendar year Western Gull (subspecies occidentals with light upper parts) in second-cycle plumage. Note the gray scapulars, contrasting with the light-brown and faded wing coverts. The bill is bright yellow with only a few dark markings. The orbital ring is yellow. The tail is mostly white with a broken dark subterminal band. San Diego, USA, 11 April 2013. 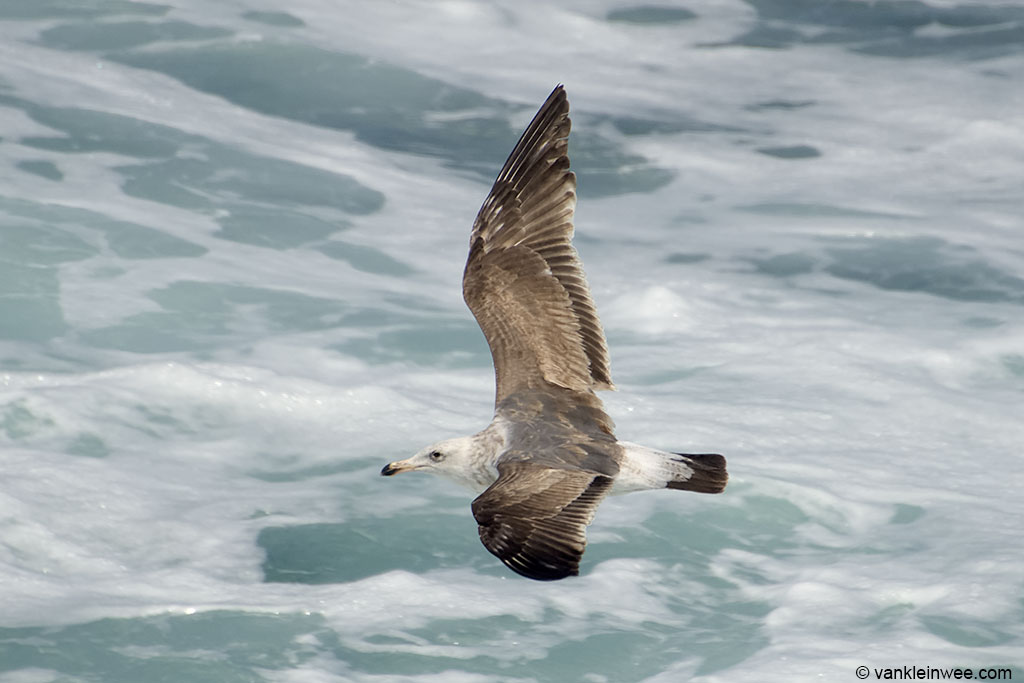 Third-calendar year Western Gull (subspecies wymani with dark upper parts) in second-cycle plumage. Note the uniform brown wing coverts and the rounded primaries. The bill is bright-yellow with a dark tip, the head white with only light streaking, the tail coverts are only slightly barred. San Diego, USA, 11 April 2013.

More photos of third-calendar year Western Gulls can be seen on my Flickr page.

I’ve identified only one fourth-calendar year Western Gull, based on its adult appearance but with a large amount of black in the alula and primary coverts . 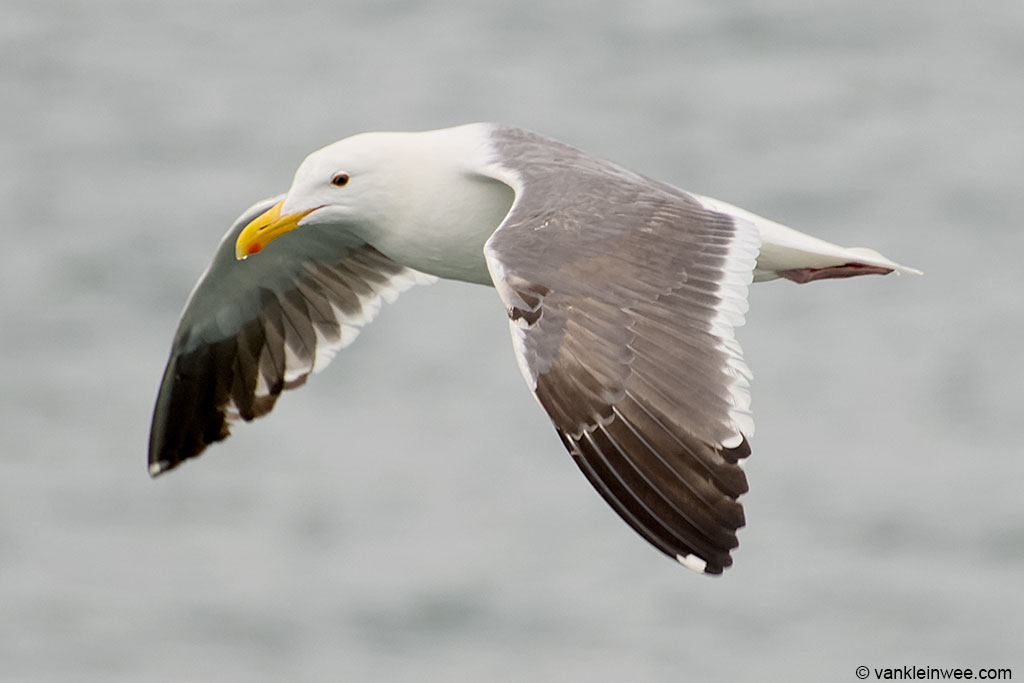 Being unfamiliar with this species and its full range of characteristics, it’s dangerous to age individuals with certainty, but based on my experience with large gulls in Europe I believe the following individuals to be youg adults, possibly 5th-calendar year individuals. This is mostly based on the presence of black in the alula and primary coverts (but in a lesser amount than can be seen in the 4th-calendar year type above). 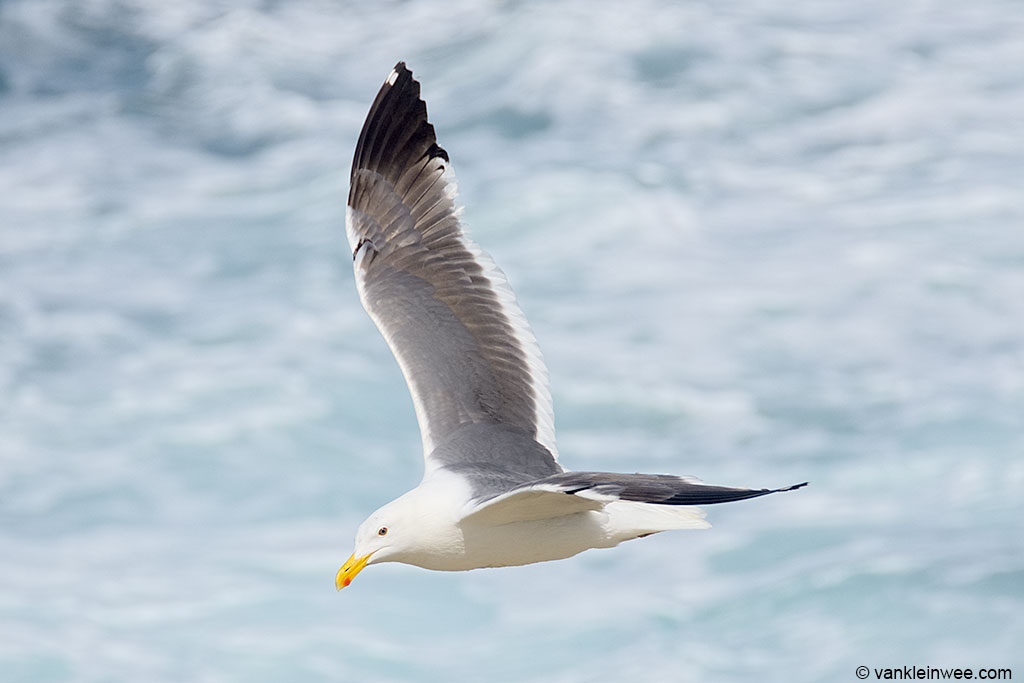 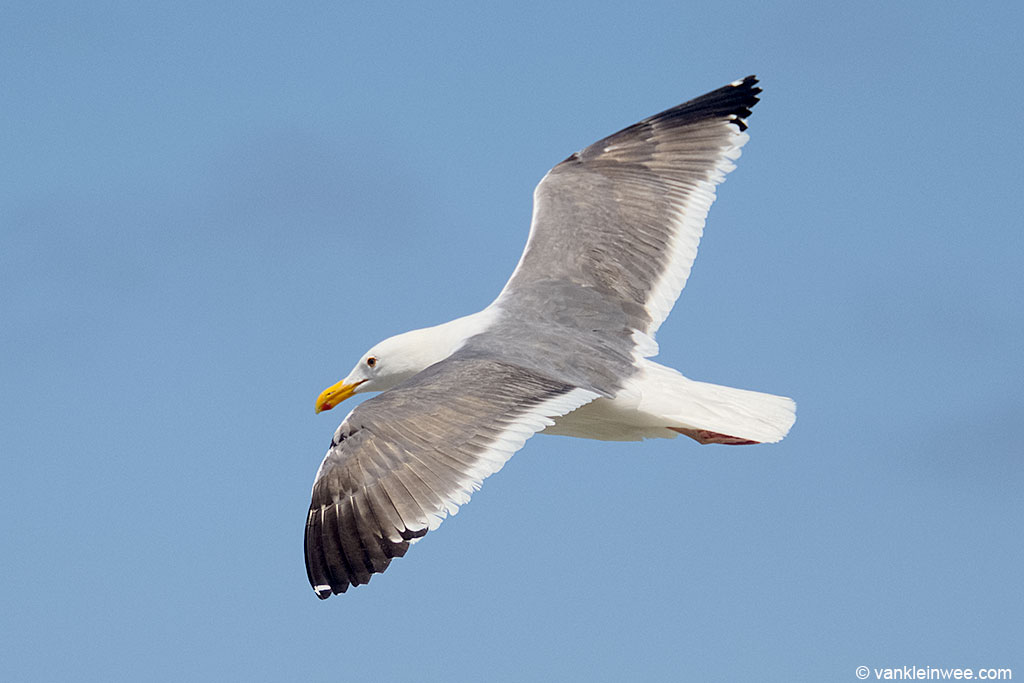 To end this rather long post, some photos of beautiful adults. 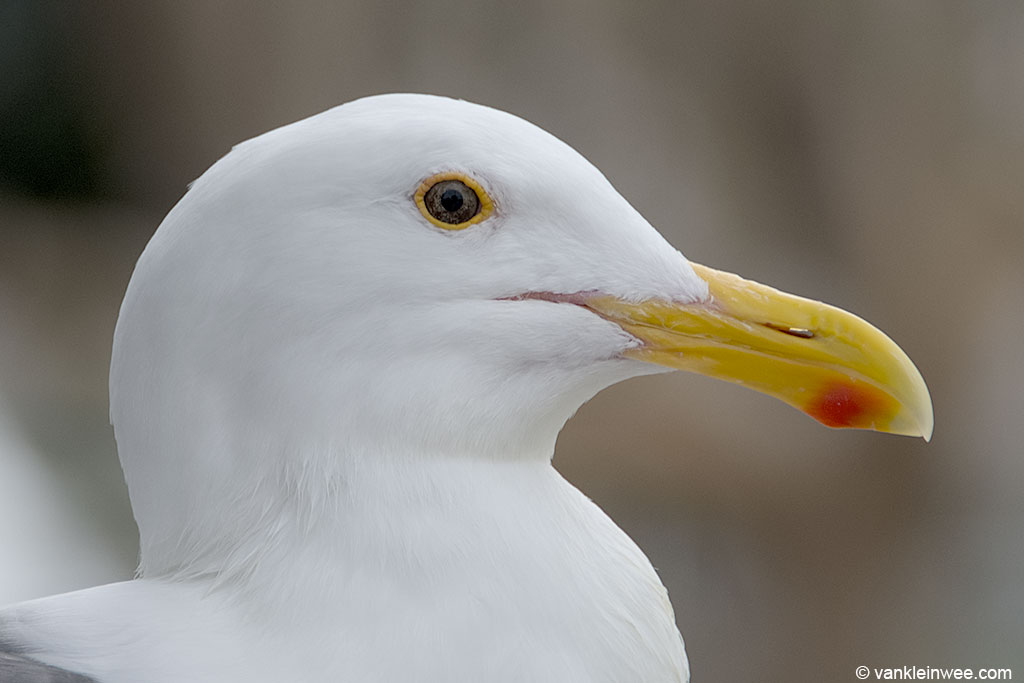 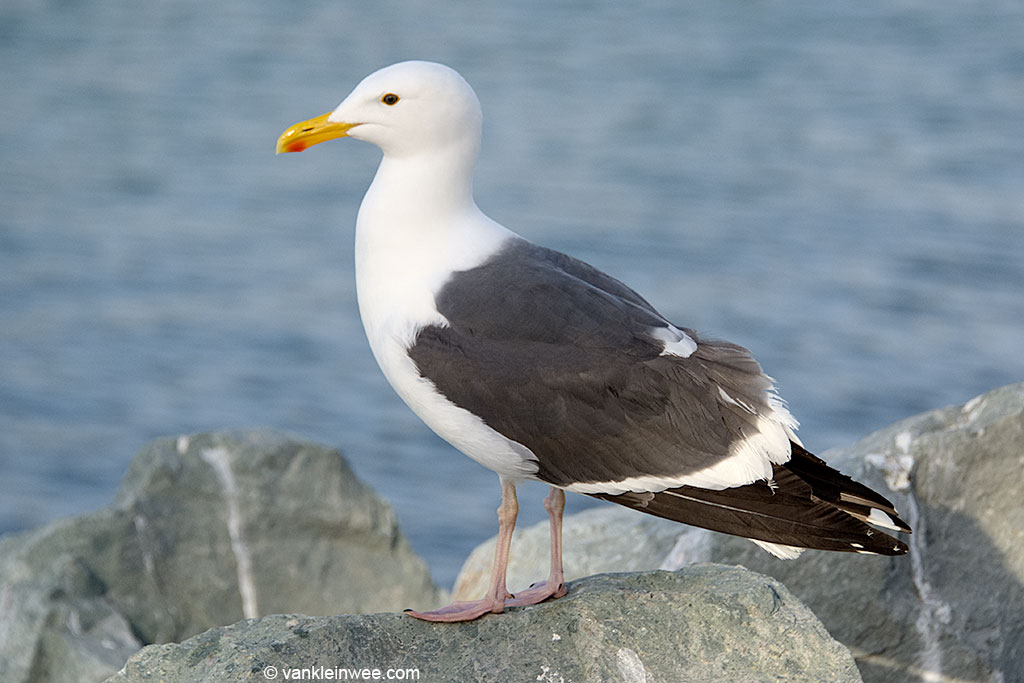 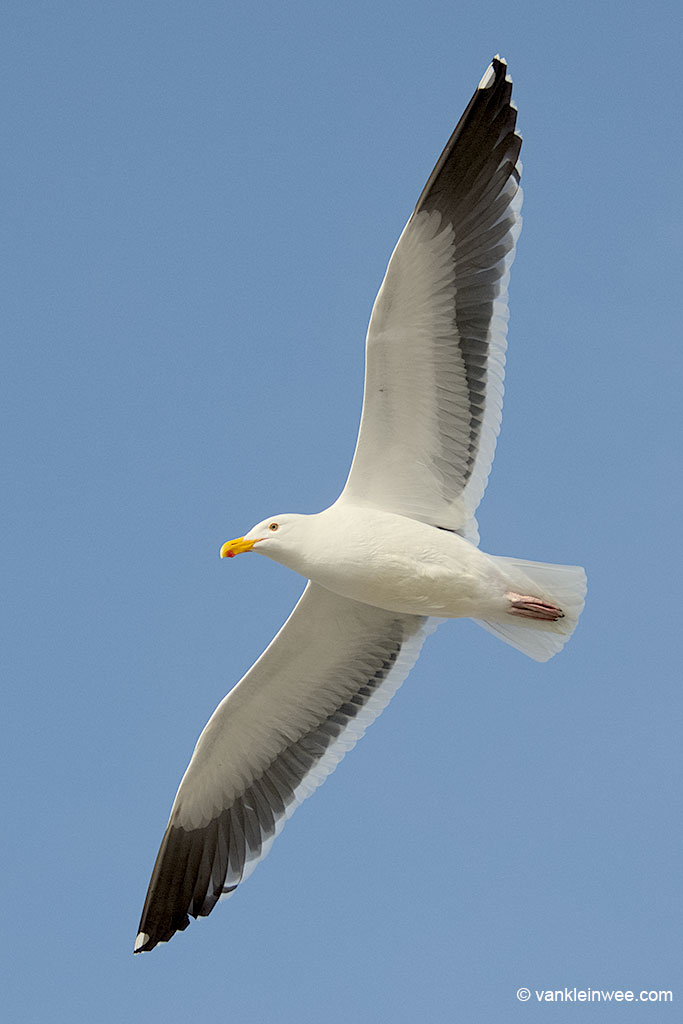 More photos of adult Western Gulls can be seen on my Flickr page.

I was also able to capture some pair bonding behavior on video, including choking, head-tossing and mew-calling:

Gulls of the Americas Steve N.G. Howell and Jon Dunn